Whether shared in the convivial company of others or sipped quietly beside a cozy fire, whisky, with its unmistakable rich amber color and complex flavors, evokes a unique sensory experience. And, it’s witnessing a rebirth.

By definition, whisky is a distilled alcoholic beverage made from a grain mash. The process of distilling goes back at least a millennium – with whisky production first documented in the 15th century in Ireland and Scotland, where mild climate and long summer days are ideal for growing barley.

Today, whisky is produced around the globe, leading to distinct regional and local flavors. Dried fruits, citrus or floral esters (a chemical compound derived from an acid), spices and the effect of maturation in an oak cask, all contribute to its complexity and mystique. The quality, flavor, price and name given to a whisky depends on the grain used in its making – typically barley, wheat, rye, corn (maize) or even buckwheat. “Whisky” is the spelling most commonly used in the category, including in Scotland, whereas “whiskey” is used when referring to Irish and some U.S. varieties.

No longer a staid drink of a bygone era, whisky – or whiskey – is finding favor among the much sought after millennials, including women. Unlike previous generations, millennials are less loyal to a single category and enjoy trying the latest trends and craft products made from organic and locally-sourced ingredients. The fact that younger imbibers are less bothered about strict traditions and whisky guidelines has led to an explosion of diversity in the category. The popularity of whisky cocktails as well as pop-up events and tasting sessions taking place in cities all over the world are also driving production and sales.

Whisky and white spirits (e.g. vodka, gin, aquavit) share roughly equal positions as market leaders by volume, each responsible for around 16% of the 22 billion liters of potable spirit expected to be sold globally in 2018. When it comes to whisky, Scotland is the leading producer, followed by the U.S., Canada, Japan and Ireland.

Based on 2017 data from Euromonitor, among the whiskies produced within the EU, Scotch whisky and Irish whiskey accounted for exports valued at €4.9 billion and €600 million respectively. Emerging markets and rising incomes are driving market growth – a trend that will continue as the number of middle income and affluent consumers increase, particularly in Asia. In fact, more Asian whiskies are ending up on shelves in the U.S. and Europe – and winning awards as well. The increasingly multi-cultural whisky frontier is often referred to simply as: “world whisky.”

Back to basics: Scotch whisky 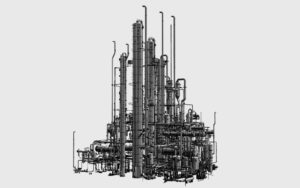 To carry the label, “Scotch whisky,” the amber beverage must be produced at a distillery in Scotland. Scotch malt whisky is made from water and malted barley, or in the case of a blended or grain whisky, whole grains of other cereals may be added. Additional steps require that:

GEA offers distillers best-in-class, mash house yields, energy-saving distilling technologies and decades of process engineering experience. Our deep expertise in brewing and chemical process engineering are driving innovations in the distilling industry, which is largely governed by convention and tradition. Our spirits customers, which include producers of grain neutral spirits, neutral alcohol, vodka, aquavit, rum and grain whisky, and range from large global players to regional favorites, benefit from GEA’s ability to bridge innovation and tradition.

“Our plants are supporting leading distillers, including producers in the sugar and starch agri-businesses, who subsequently are the ones providing the bulk of alcohol and rectified neutral spirits to the drinks industry,” explains David Scheiby, GEA Business Manager Beverage – Spirits.

Upstream, downstream: GEA has you covered

GEA upstream process technology, distillation lines and equipment includes solutions for mash houses, grain or cereal milling and mashing, mash cooking and flash cooling with heat recovery, fermentation and yeast management systems. Partnering with leading experts, producers are able to develop whisky and flavored spirits recipes that embody the desired style and character that customers are looking for, as well as the accompanying processes. “Companies that are new to distilling and looking to produce premium products within the shortest possible aging criteria are in the safest position when it comes to investing in a new plant and can greatly benefit from such collaborations and GEA’s process experience,” explains Scheiby.

Within the Scotch industry, the term “marriage” is a widely used to describe “marrying the spirit” with the wood in the maturation or in the final blending process – which ideally is never rushed. With the help of GEA solutions –where innovation meets tradition – the subtle romance that is whisky emerges.