Kesselring brewery relies on the automation system GEARBOXX™ from GEA

“Ordered today and delivered tomorrow” – this was the motto when Kesselring ordered the new innovative automation system GEARBOXX™ at the end of November 2011. 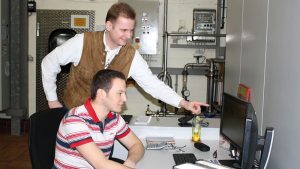 The new control system monitors and controls each process step in the brewhouse. Manager Peter-Michael Himmel and brewmaster Robert Stupac revealed the reason for the new acquisition and replacement of the old system.

The old control system had been working since 1975 without fail. It was at that time one of the first automatic systems of the still young generation being “fed” by punched cards.

However, by the time the system was getting on a bit and did no longer respond to the requirements of a modern brewery. Immediate “retirement” was decided, and the system was replaced by a modern automation system.

The GEA scope of supply included MCC cabinets complete with necessary hardware engineering as well as software engineering, including commissioning. 24 January 2012 was agreed as start-up date for the first brew – two months are a tough time target, but feasible. Immediately after the turn of the year the “hot phase” started with electric installation and I/O tests. The first brew was produced on schedule.

According to the junior manager Peter-Michael Himmel, this acquisition is a tremendous investment for the Kesselring brewery: “But worthwhile – because this automation is an investment for the future.” After all, the modern GEA control GEARBOXX™ allows to monitor the brewing process from everywhere around, even with a notepad or smartphone. All staff members in charge are immediately informed via SMS about possible failures at the plant and their tangible causes. Production losses and time-killing fault finding are avoided in this way, if staff members must necessarily appear in the middle of the night. 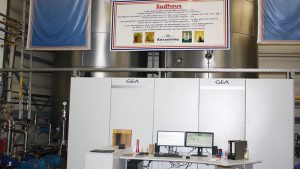 A further, great ecological advantage is the low energy consumption of the plant, because the pumps are no longer running all the time at full capacity, but are adapted automatically to the actual demand of energy.

GEARBOXX™ brings about considerable ease of work to the brewers. For instance, the plant starts automatically the preparation of the first brew for the day at midnight. The brewer begins his morning shift at five o’clock with checking the operation of the control system. Then he starts the second brew. The time gained in this way can be used for other tasks.

This modern automation system was developed, installed and commissioned by GEA located in Kitzingen, with whom the private brewery Kesselring has been maintaining a successful business relationship since many years. “For us it was important to have a competent partner nearby, if we need urgent help”, manager Peter-Michael Himmel explains his decision. “In addition, this intelligent automation system can be expanded for use in other facility sections.”

GEA Brewery Systems is happy to present a showpiece of its brewhouse control system GEARBOXX™ in immediate vicinity of its head office.

Many customers of GEA have already taken the opportunity of having a look at the plant in daily field operation and are convinced of the obvious advantages. And what is the opinion of brewmaster Robert Stupac of this pioneering innovation after some months running time? “Right from the first day, the plant was running like clockwork and Kesselring beer is pouring in proven quality and unchanged recipes into bottles and kegs.”