The Pick n Pay Group is one of Africa’s largest and most consistently successful retailers of food, general merchandise and clothing. The group has a total of over 770 stores, made up of Hypermarkets, Supermarkets and Family Stores. Matador Refrigeration and GEA worked together, in order to provide an optimal refrigeration system to the flagship store of the Pick n Pay Group, called The Falls. The store is located in Roodepoort, in a suburb of Johannesburg (South Africa). 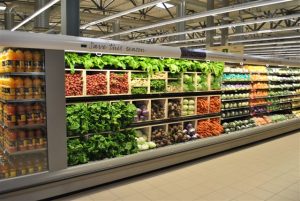 The refrigerating plant at The Falls store is a R134/CO2 sub-critical cascade-type system, that ensures reliable, cost effective and energy efficient installations for the Pick n Pay Group. Thus, optimal refrigeration is provided to all cabinets of the supermarket. In general, these cabinets are equipped with meat, vegetables, fish, candys and other food.

In the following, you can find some interesting facts about the installation of the system.

The unique design allows for cooler liquid refrigerant being supplied to the evaporators, maximizing their efficiency and contributing to the already energy-efficient plant.

Within refrigeration technology, carbon dioxide (CO2) is known by the name R744 and has a long history. It is a colorless gas which liquefies under pressure and has a slightly acidic smell and taste. Carbon dioxide has no ozone depletion potential (ODP = 0) and a negligible direct effect on global warming (GWP = 1) when used as a refrigerant in closed systems. It is not combustible, is chemically inactive and heavier than air. Carbon dioxide has a narcotic and asphyxiating effect on humans only at higher concentrations. Carbon dioxide is available naturally in large quantities.