At Schönbuch Braumanufaktur (Böblingen, Germany), creating beer is meticulous work. “But, if you do what you love, you’ll never have anything to worry about,” says CEO Werner Dinkelaker. The Dinkelakers have managed their family brewery for six generations and, in that time, collected an impressive array of awards. 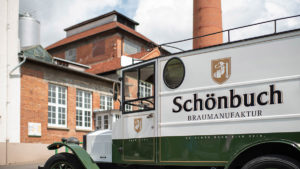 A medium-sized regional brewery with an annual production of 50,000 hL, Dinkelaker and his brewmaster, Gustavo “Gustl” Tresselt, have worked together to “give their beer a home,” teasing out the nuances in flavors to deliver consistently excellent results. And, following a visit to the GEA stand at BrauBeviale 2016, Tresselt tasted — and liked — an alcohol-free wheat beer from Klosterbrauerei Andechs, which had been dealcoholized with the GEA AromaPlus unit, and an idea was born!

“Andechs was our first customer in Germany to use reverse osmosis to dealcoholize a beer with AromaPlus thin-film polymer membranes. This project was very successful from the start and helped us take our aroma message to the world,” says GEA membrane filtration specialist, Ralf Scheibner.

Produced and in use in the US, Belgium, Germany and the UK, the AromaPlus is equally as efficient as thermal processes such as evaporation to remove ethanol from beer — without the loss of aroma. “You basically destroy a beer when you thermally extract alcohol and reconstitute it,” says Scheibner: “For GEA, reverse osmosis is clearly the best way to make a great, unadulterated beer with original flavors.”

Tresselt confirms that adding sugar, wort or any other ingredient to improve taste after technical dealcoholization is a no-go at Schönbuch. He prefers to adapt the original beer recipe: “Alcohol-free beer should be isotonic and healthy,” he explains, “not a reconstructed, sweet artificial drink, but a genuine beer.”

Reverse osmosis works at filtration temperatures of approximately 10 °C, presenting no thermal stress to the beer. The composite membranes only allow water and alcohol to pass through and, as such, essential ingredients that comprise the aroma, color and turbidity are retained. GEA uses thin-film polymer membranes because they have a higher chemical resistance than the cellulose acetate membranes originally used for dealcoholization.

The reverse osmosis system installed at Böblingen operates in batch mode, with the lager or wheat beer circulating through the pressure tank and the membrane unit. Dealcoholization takes place in several stages. During preconcentration, the traditionally brewed beer is fed to the unit from a pressure tank and the volume is reduced. Ethanol and water are forced through the membranes while the ingredients remain on the beer side. Then, in the diafiltration step, the process is continuously supplied with deaerated water to compensate for further volume losses until the desired residual alcohol content is reached. In the third stage, the dealcoholized and concentrated beer is diluted with deaerated water to obtain the required extract content. The alcohol content is then approximately 0.4%.

After BrauBeviale 2016, Tresselt and Scheibner traveled to the GEA technology center in Karlsruhe to test Schönbuch’s own alcohol-free beers. From that moment on, there was only one way forward for the brewmaster — to secure an investment. “I’ve never signed a contract so quickly,” exclaims Scheibner. 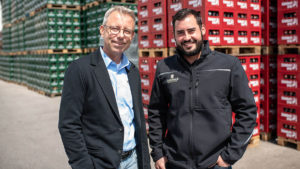 By spring 2018, the AromaPlus unit was in situ and operating, with an official inauguration taking place in May 2019. “My goal is to take our proud heritage responsibly into the future, and to be a role model for the family, for the employees and for the region,” says Dinkelaker. He sees the booming market for alcohol-free beer as an opportunity to satisfy a greater number of customers and better serve consumers such as athletes, pregnant women and people who abstain from alcohol.”

“We were a little worried that dealcoholized beer might drive customers away,” admits Dinkelaker. But, the 17% increase in sales during the first quarter of 2019 alone has certainly quelled any concerns. “Now,” says Tresselt, “every day the brewery receives enthusiastic comments about our alcohol-free beer. We plan to produce 3000 hL of our two alcohol-free varieties annually, which, during a hot summer, could increase to 3500 hL.” Dinkelaker envisages a 30% increase in alcohol-free draft wheat beer sales in the next 5–10 years — with beer that only makes you happy … and nothing else.

GEA offers the compact, cost-effective AromaPlus membrane filtration plant for beer dealcoholization. Supporting small to large feed rates, and configurable for both batch and continuous processes, the dedicated AromaPlus system is built on our industry-renowned reverse osmosis (RO) membrane filtration technology. If you want to make a great dealcoholized beer that still retains its original flavors, then you can find out more here.