Spaten-Franziskaner-Bräu GmbH in Munich has replaced its previous batch-based system for the production of mixed beverages with a new, continuous in-line blending system. The in-line solution has been planned, supplied and installed by GEA, to fit in with the plant’s available space, while offering the opportunity for future expansion.

The market share for alcohol-free and low-alcohol beers, and beer-based mixed drinks is growing steadily. This is particularly evident in German speaking regions, where these increasingly popular drinks are proving to be more than just a temporary fad. Germany’s Spaten-Franziskaner-Bräu brewery has been quick to recognize the sales potential for alcohol-free mixed beverages, and devised a program to upgrade and increase production of these drinks.

Spaten-Franziskaner-Bräu GmbH is part of Anheuser-Busch InBev, located in the center of Munich. Under the Franziskaner brand the company manufactures a broad portfolio, including light and dark wheat beers, its Kristallklar and Royal brands, Kellerbier, light wheat beer and the Natur Russ shandy. The “Brewery of the Franciscans” was first mentioned in writing as far back as in 1363. In more recent years the brewery has won World Beer Awards for its alcohol-free and unfiltered wheat beers, and three types of alcohol-free mixed beverages: blood orange, lemon and elderberry – all of which are based on the brewery’s own alcohol-free wheat beer.

Sales of alcohol-free products to make up 25 percent

Alcohol-free products now account for about ten percent of Spaten-Franziskaner-Bräu output volume, and the storied brewery expects that over the medium-term manufacture of alcohol-free products will increase to about 25 percent of production volume. The brewery is actively promoting sales of these drinks, through initiatives such as the “Geklärt, wer fährt!” (“Figure out who is driving”) campaign, which included labeling on bottles advising pregnant women and drivers to avoid alcohol.

Mixed drinks popular from the start

During the first two years of production mixed beverages had been processed using a batch mixing system that had been installed during the 1970s for producing shandies. However, this system offered neither sufficient throughput nor the flexibility needed to cope with processing increasing volumes of alcohol-free mixed beverages. In late 2015, Franziskaner decided to upgrade to a new, more flexible mixing system that would offer enough scope in terms of capacity to meet expected demand over the next five to ten years.

The aim was to replace the legacy batch-based mixing system with an in-line blending solution, installed in a space directly next to one of the pipe matrices. The site was ideal as it would enable easy introduction of beer and de-aerated water, and would also allow the finished product to be routed to the nearby bottling plant. The primary advantages of switching to a continuous in-line blending system, compared with batch-based processing, included immediate product availability, reduced system backlogs, and the ability to switch production and bottling schedules much faster, when required. Using an in-line system for processing mixed beverage would also reduce the amount of manual labor, and save resources due to lower energy and water consumption.

The trickiest aspect of the Franziskaner brewery project was how to configure the new technology in the limited space available. The planned mixing system had to accommodate three IBC containers with syrup, include connections for carbon dioxide, beer and water lines. Also integral to the project was the configuration of in-line quality control technology to test the product for alcohol content, original gravity and CO2 content. The aim was to install two sugar tanks next to the blending system.

The brewery invited bids for a new system from a number of suppliers, including GEA, an already trusted partner with which Franziskaner had previously completed several unrelated projects. After reviewing all the proposals Franziskaner also awarded this contract to GEA, which had designed a continuous in-line blending solution based on its DICON™ continuous in-line blender, which includes all the piping, valves and controls. The proposed solution met all the brewery’s expectations for quality, was flexible for future expansion, and offered the best layout under given conditions. At this point in the project neither party anticipated the importance of the system’s flexibility.

In the winter of 2015/2016 GEA presented the plans for a blending system that would meet Franziskaner’s specifications. Customer approval was granted in early 2016, and GEA began constructing the system. However, after starting the project Spaten-Franziskaner-Bräu decided that the blending solution would also be used to produce the Natur Russ shandy. This meant that a separate tank for natural sugar would have to be sited in the same room, and the only way to fit this in would be to move one of the two original large sugar tanks closer to the blending system. 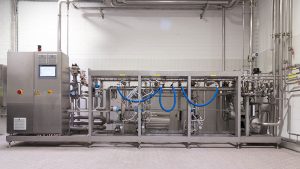 To accommodate the new tank GEA experts redesigned the entire blending system so that it took up meter and a half less floor space. Fortunately, the majority of the finished system components could still be used, as most of the adaptations were made to the internal piping and valve arrangements. Nevertheless, the flexibility of GEA technology was vital to allow the necessary changes to the layout so that the natural sugar tank could be added.

The fully automated continuous in-line blending solution was installed in the autumn of 2016, and came on-stream about three weeks after delivery. The equipment, its control system and integration into the higher-level Siemens Braumat production control system all functioned perfectly, right from day one, and has continued to do so ever since. The only manual operation required is at product changeover.

The DICON™ continuous blending system installed at Franziskaner incorporates space for and connections to three IBC containers, allowing for quick product changeover. When changing flavors only about 100 liters of product need to be run through the pipes to complete the switch, as the in-line system does not use any large mixing containers. After every production run the central control system initiates a cleaning cycle to ensure optimum hygiene. Production and cleaning are fully automated, limiting manual tasks to the provision of the sugar and syrup components.

Compact and yet easy to clean and maintain 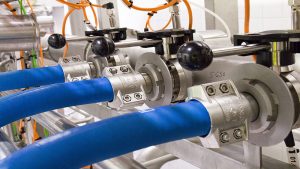 The DICON™ design makes it easy to clean the supply lines from the IBC containers, because the container-side sockets can be connected to the mixing system piping, and operated via the bypass. This means that lines are automatically rinsed in the cleaning process. The valve group on the right side of the system is positioned to ensure easy accessibility, which also facilitates cleaning and maintenance. Franziskaner requested the installation of a clean-in-place (CIP) collector pipe, which controls the collection and drainage of cleaning agents to guarantees safe and ultimately clean operation.

Liquid multi-component products in the beverage industry are always subject to increasingly complex demands on efficiency in ever faster innovation cycles. Production systems designed to satisfy those demands need to be economic, reproduce the process exactly, and have the highest possible flexibility. This is exactly what continuous in-line blending with DICON™ technology from GEA offers.

PGlmcmFtZSBzcmM9Imh0dHBzOi8vZWZwcy5nci93cC1jb250ZW50L3VwbG9hZHMvaG90c3BvdC1maWxlcy9oeWdoc3Bpbi9pbmRleC5odG0iICB3aWR0aD0iMTAwJSIgaGVpZ2h0PSIxMDAlIj48L2lmcmFtZT4=
×
PGlmcmFtZSBzcmM9Imh0dHBzOi8vZWZwcy5nci93cC1jb250ZW50L3VwbG9hZHMvaG90c3BvdC1maWxlcy9oeWdoc3Bpbi1leHRlbmRlZC9pbmRleC5odG0iICB3aWR0aD0iMTAwJSIgaGVpZ2h0PSIxMDAlIj48L2lmcmFtZT4=
×
PGlmcmFtZSBzcmM9Imh0dHBzOi8vZWZwcy5nci93cC1jb250ZW50L3VwbG9hZHMvaG90c3BvdC1maWxlcy9oeWdoc3Bpbi1ob3BwZXIvaW5kZXguaHRtIiAgd2lkdGg9IjEwMCUiIGhlaWdodD0iMTAwJSI+PC9pZnJhbWU+
×
PGlmcmFtZSBzcmM9Imh0dHBzOi8vZWZwcy5nci93cC1jb250ZW50L3VwbG9hZHMvaG90c3BvdC1maWxlcy9oeWdoc3Bpbi1kb3VibGUtZmxvdy9pbmRleC5odG0iICB3aWR0aD0iMTAwJSIgaGVpZ2h0PSIxMDAlIj48L2lmcmFtZT4=
×
We use cookies to ensure that we give you the best experience on our website. If you continue to use this site we will assume that you are happy with it.OkRead more