The Art of Brewing at the Highest Level 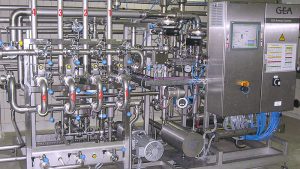 Stieglbrauerei in Salzburg is Austria’s largest and leading private brewery. It combines tradition and innovation to a successful concept that makes Stiegl the strongest beer brand in Austria. The share of beer mix beverages in the product range is steadily increasing. These beverages include the “Stiegl Radler” (a mixture of beer and lemonade) in the flavors raspberry, lemon and unfiltered grapefruit as well as the elderberry wheat beer mix “Stiegl-Weisse Holunder-Radler”.

The independent, family-owned brewery combines the love for the art of brewing and the experience of over 500 years of brewing tradition with the advantages of new technologies.

Against this background, in summer 2011, the brewery was looking for a technology for the flexible and efficient production of high-quality beer mix beverages. This technology should replace the existing batch production process with a low level of automation.

The decisive factor for Stieglbrauerei to entrust GEA Brewery Systems with this project was the convincing customized plant concept designed for
• complete automation of the core processes dosing and blending,
• optimum adaptation to the space available in the brewery and
• minimization of product losses.

In spring 2012, GEA commissioned a fully automatic blending system for the production of beer mix beverages.

The blending system is designed for a nominal capacity of 300 hl/h. It produces finished carbonated beverages by direct inline dosing and blending of the beverage components

• beer
• deaerated, cooled brewing water supplied from a central holding tank
• beverage base supplied from four stationary storage tanks or from flexible intermediate bulk containers
• carbon dioxide
into the finished beverage pipe according to the recipes stored in the process control system.

The use of precision flow meters – mass flow meters are used in the dosing lines for beverage base and carbon dioxide – and special digital flow controllers ensures a very high degree of blending accuracy.

A subsequent 50 hl buffer tank hydraulically separates the blending system from the filling lines. During the production process, the control system automatically and continuously adjusts the blending system capacity to the withdrawal capacity of the filling line down to 50 % of the nominal capacity. Thus, the number of system shutdowns is minimized and a consistently high blending accuracy is achieved.

Assuring constantly high quality
During production, already at the inlet of the buffer tank, precise analytical devices, especially designed for measurements in beer mix beverages, continuously record the quality parameters
• original gravity in °Plato
• alcohol content in vol %
• CO2 content in g/l
and transfer the information via a data bus system to the process control system. At the same time, the control system compares the measured actual values with the allowed limit values in the recipes. This ensures that only product with perfect quality is transferred into the buffer tank and to the subsequent filling lines – even during startup and shutdown of the blending system.

The measured quality parameters as well as all consumption and production quantities are transferred to the brewery’s management information system via a data bus system.

Ensuring maximum efficiency
After pre-selection of the desired quantity of finished beverage to be produced and after connection of the respective beverage base source – storage tank or flexible intermediate bulk container – the blending system is started fully automatically, produces the preselected quantity and is automatically shut down again when this quantity is reached.

During shutdown of the blending system, the dosing lines for beer and beverage base are pushed out with deaerated water, so that product losses are minimized. For this purpose, the beverage base line is installed along the stationary storage tanks and the location for the flexible intermediate bulk containers with a gradient to the dosing pump at the blending system.

The blending system and the buffer tank fit harmoniously into the brewery. A compact design was particularly important for the customized system, so that the two functional units that were already completely pre-mounted in our workshop in Kitzingen require as little floor space as possible.

“The blending system of GEA for our Stiegl-Radler meets all requirements to our full satisfaction. We especially have to point out the precise mixing. From the first day on, the very tight limit values were met and we had a trouble-free production process. This is especially important for us since we go directly to the filler and even the smallest failure in the mixing process would have serious consequences. With this method we can save pressure tank capacities, which is especially important for our further development with a wide product range.”