Skiing and eating salmon – at ambient temperatures above 50°C

Even on the Persian Gulf, people can eat delicious salmon! Salmontini, a manufacturer of smoked foods, runs a restaurant in Dubai, that serves its guests smoked salmon freshly caught and imported from Scotland. An eight-stage multicompressor refrigeration system with four GEA HGX34e compressors was installed in the restaurant so that the smoke, that is produced in the roasting oven, can be dried and dehumidified in a controlled way. 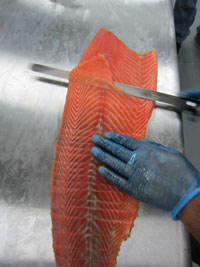 The restaurant Salmontini is located in the “Mall of the Emirates”, a shopping center of more than 220.000 sqm where shops of all kinds, a cinema complex and even an adjoining indoor ski hall can be found.

In order to produce salmon of highest quality in this restaurant, a German company for climate and smoking technology, called “REICH Klima- und Räuchertechnik”, delivered the systems engineering.

A controlled drying and dehumidification of the smoke that is produced during the smoking process is ensured by a microprocessor controlled eight-stage multicompressor refrigeration system of the “GÜNTNER KÄLTETECHNIK GmbH” with four GEA HGX34e/315-4 compressors.

A maximum refrigerating capacity with a total of 36 kW is achieved. The condensing temperature is 55°C, the evaporating temperature -2°C. The system is operated with the refrigerant R134a.

Depending on the philosophy and the quality demands of the customers, the smoking processes are very variable. Air volume, air humidity, temperatures and the refrigeration requirements are not constant and even change during the smoking processes that sometimes last several hours. The refrigeration requirements for example vary between 5 kW and 36 kW.

The multicompressor refrigeration system with robust technology of GEA commercial compressors is ideally suited for these requirements and the extreme weather conditions in Dubai so that a constant evaporating temperature is ensured.

An eight-stage multicompressor refrigeration system with four GEA GEA HGX34e/315-4 compressors was installed in the Salmontini restaurant in Dubai so that the smoke, that is produced in the roasting oven, can be dried and dehumidified in a controlled way.