New Belgium Brewing (NBB) is one of the most successful companies of the new generation of breweries in the United States. It was founded in 1991 in Fort Collins, Colorado, and with an output of over 1 million hectoliters per year it is the third-largest craft brewer. Now, New Belgium Brewing is planning a further expansion in Asheville, North Carolina. A new brewing facility on the U.S. east coast is expected to produce about 625,000 hectoliters of beer per year.

Brewing equipment “made in Germany“ for successful craft brewer 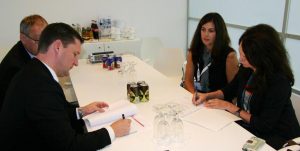 During drinktec 2013 in Munich, New Belgium Brewing entrusted GEA Brewery Systems with the responsibilities of the turnkey supplier for project engineering, project planning, delivery and installation of the equipment. The innovative products and technologies for the brewhouse and the cold process area come from the two locations of the internationally renowned brewing equipment manufacturer as well as from other companies of the GEA Group.

The story of NBB began in 1989 when brewery co-founder Jeff Lebesch went on a bike trip through European beer cities. From this trip, he brought the idea for the name of the first beer: „Fat Tire“. Many more beer “styles” have been added: for example, IPA’s and Blondes, which are sold in New Belgium’s 37 states of distribution in the USA. Traditional craft brewing always plays an important role at New Belgium Brewing.

The modern brewhouse is designed for a capacity of 200 hl cold wort per brew and will produce up to 12 brews per day.
Wort preparation begins with the MILLSTAR™, the efficient wet mill from GEA. With its integrated automatic quality system it enables uniform conditioning of the malt and homogeneous milling. To ensure maximum extract yield, high wort quality and efficient use of resources in the lautering process, a lauter tun with LAUTERSTAR™ technology will be used. With a diameter of 6,100 mm, it provides a lot of flexibility for present and future recipes. Continuous control of the lautering process is realized by the multifunctional lautering management (MLM). This ensures high reproducibility for all brews.

The wort is boiled in a wort kettle designed for atmospheric boiling with a JETSTAR™ internal boiler. This internal boiler provides not only high flexibility for the requested wort qualities of each beer type. The innovative two-phase boiling system from GEA also allows to separate the processes of wort boiling and evaporation. With this gentle method, important protein fractions are preserved. Furthermore, the necessary homogeneous mixing and circulation in the wort kettle is ensured. All wort particles are evenly boiled and
the hop bitter substances in the wort are optimally extracted and isomerized. The two-phase boiling leads to excellent technological values for DMS reduction, TBI and coagulable protein: an ideal method to obtain consistently high wort and flavor stability for perfect beer and foam quality.

Less primary energy
The energy storage system for a maximum evaporation of only 4 % allows the operation of a so-called energy-balanced
brewhouse: Primary energy is only required for wort boiling and the final step of the heating process. Thus, the
consumption of primary energy is reduced significantly. The control module Intelligent Wort Management (IWM) from
GEA Brewery Systems regulates the wort boiling process and precisely calculates the evaporation rate. It does not matter
whether other ingredients are added to the wort kettle after the start of boiling.

Summary of the brewing line equipment

All processes, from filtration to bottling and also the two  CIP systems, are fully automated. The CIP systems with  GEA valves and valve blocks comprise three  and five tanks each for tank and pipe cleaning. Thus, the  systems are designed for the entire cold process area  including bottling. The CIP tanks will be manufactured  by GEA. Cleaning of all large and small  tanks is also intended to be done with cleaning equipment from GEA. The fermentation tanks, which require  intensive cleaning, will be equipped with orbital cleaners;  other process tanks will have rotating or static spray balls.

Typical hop flavor
Green beer will be treated with a GEA separator  GSC 150 with a capacity of 240 hl/h. The connection with  a fully automatic dosing and mixing system for Special  dry hopping gives the typical strong hoppy flavors to  the different beer types. The subsequent beer Filtration  is traditionally done with a Filtrox kieselguhr filter type Synox PF with a filtration capacity of 180 hl/h. This System is very flexible, especially in the processing of small Batch sizes. Instead of two combined tanks (PT2/VNL), a FBB tank is used, supporting the flexibility of the filter.

A water deaeration unit (hot deaeration) with upstream  activated carbon filter reduces the chlorine content. The unit  with a capacity of 100 hl/h guarantees lowest oxygen values in the deaerated water. The filtered beer will then be stored in six bright beer tanks provided with GEA valve blocks and double seat valves. An automatically controlled  CO2 pressure compensation line ensures little CO2 losses  during filling and emptying of the tanks.

Automation and process control
The GEA process automation solution controls the entire  production process: from malt intake up to the bright beer tank cellar. The Wonderware system platform ArchestrA is used including the MES products for the SCADA level.  The underlying PLC platform is based on the Rockwell ControlLogix® control system with standard and library functions and the Rockwell Equipment Phase Manager.  NBB developed the automation solution together with GEA.

GEA uses the latest technologies and thus meets high standards in terms of quality, efficiency, flexibility, environmental protection and reliability. With regard to the equipment or the production process: economic and careful use of resources is always the top priority. GEA guarantees highest quality Standards for all production processes: from internal/external prefabrication up to the final assembly. These standards are constantly monitored and recorded in cooperation with New Belgium Brewing. After comprehensive commissioning and plant training, the project is expected to be completed by the end of 2015.