The family owned and operated Mittelstand meat and sausage producers Peter Braun, Fleisch & Wurst e.K., located in Konken in the Rhineland-Palatinate region of Germany, is a meat-processing company with around 100 employees and with a long tradition. To ensure that fresh beef and ham, as well as sausage in cans or jars get to the consumer in fresh and top-quality condition, sophisticated refrigeration systems for production and storage areas are essential. 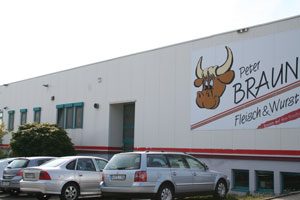 Peter Braun enjoys a good reputation, and not only in its own region. Daily – and where necessary, several times a day – it sends refrigerated delivery vehicles to its own 14 butcher shops and to additional grocery retailers. Its assortment includes fresh meat and sausage products from its own slaughterhouses – for deli counters, self-service supermarket areas, and canned-sausage displays.

At Peter Braun, three stand-alone and networked refrigeration systems provide cooling for production and storage. The oldest system, which provides refrigeration for the production process and the cold-storage rooms, was operated with the refrigerant R22.

According to European Union regulations currently valid (EG Regulation No. 2037/2000), however, it would not have been allowed to service or repair this oldest system beyond January 1, 2015. For this reason, the company Pete Braun decided to replace this system – but without major alterations made to the existing piping system.

In addition, it was essential to the management of Peter Braun that the heat recovery system, replaced before exchange of the refrigeration unit, remain integrated in the overall refrigeration network. Owing to the available building space, furthermore, the dimensions of the new refrigeration system were required to match those of the old R22 system.

In summer of 2014, the company Weck Klima-Technik, specialists for implementation of refrigeration facilities, with offices in Offenbach-Hundheim (Germany), exchanged the old R22 system for a high-efficiency, compact [CF] System with a multicompressor network consisting of GEA Bock HG44e compressors. The new plant was manufactured by the company Christof Fischer GmbH of Stuttgart (Germany).

This range of compressors offers the greatest output density currently available in the sector market. Since a time window of only 14 hours was available to install and connect the new system, thorough preparatory work was necessary, which primarily involved adaptation of the piping connections and the operator control panel. In this way production continued without interruption even during the retrofitting work.

The new multicompressor refrigeration system has been in operation since July of 2014 and has already proven successful. The new system has led to annual energy savings of around 18 % in comparison to the old R22 system (with approximately the same cooling duty).

The new networked plant produces 133 kW of cooling duty at a condensation temperature of 45 °C and an evaporation temperature of -10 °C. The new facility has been integrated into the existing heat recovery system without difficulty. From the exhaust heat of the refrigeration systems, this heat recovery plant produces 256 kW of cooling duty. This recovered energy heats water in the company and serves for cleaning purposes in production.

The main components of the new installation are four GEA Bock compressors from its HG44e series: three HG44e/770-4S units with displacement of 67 m³/h and one frequency-controlled GEA Bock HG44e/565-4S compressor.

The semi-hermetic 4-cylinder HG44e compressors offer the following benefits over their predecessor models: improved efficiency, greater displacement (the largest model, the HG44e/770-4 compressor offers 67 m³/h, which is almost 20 % more displacement than the largest HG4 model), more compact dimensions, as well as a new and market-oriented arrangement of connections. The base attachments were also in accordance with industrial standards.

The energy-efficient GEA Bock HG44e series is characterized by an advanced valve-plate system, electric motors of the latest generation, and improved gas flow. The refrigerant used in this multicompressor complex is R422D with mineral oil, to enable continued use of the existing piping system.

In the 4-cylinder HG44e range, four model sizes cover the area of maximum displacement from 41.3 m³/h to 67.0 m³/h. These output ranges enable optimal meeting of performance requirements. The new range profits from a new and advanced valve plate system, electrical motors from the latest generation, and enhanced gas flow – which increase efficiency and lower energy consumption.