The beer brand Windhoek, with the portfolio Windhoek Lager, Windhoek Draught, Windhoek Light and Tafel Lager, is an example of a real success story. Therefore, Namibia Breweries Limited has expanded its production capacity with the know-how of GEA Brewery Systems.

The Windhoek beers are brewed according to the Germany Purity Law (Reinheitsgebot) and have a loyal following in Namibia, South Africa and beyond.

The brewery, established in 1920, is mainly Namibian owned and has Heineken as well as Diageo as equally strong minority stake holders. The business, supported by professional marketing, is expanding and beer export is continuously increasing. The main distribution areas are southern and eastern Africa, but the beer is also available in North America, Australia, New Zealand, Europe and the UK.

Capacity expansion
In view of Windhoek’s success, Namibia Breweries Limited decided to expand its overall production capacity. The brewery was built in 1985 by the companies Heinrich Huppmann (brewhouse), and Otto Tuchenhagen (cold process area), now both part of GEA. Since then a number of expansion projects have been carried out by the brewery equipment specialist at the Namibian brewery. For the latest expansion, increasing the capacity by an additional 16 %, the client approached GEA again for support from the conceptual stages through to the execution phase.

Three work packages
The project included work in the areas for utilities, cold process, filtration and packaging. GEA was charged with the following tasks:
• Expansion of the existing cold process capacity
• Integration of a new kieselguhr-free filtration system
• Supply of a new concentrated chemical supply station

In addition, the refrigeration system could be optimized by the installation of GEA compressors and other refrigeration components.  These three work packages were split between GEA Process Engineering South Africa and GEA Brewery Systems to allocate the right resources to the individual areas in order to carry out the project. 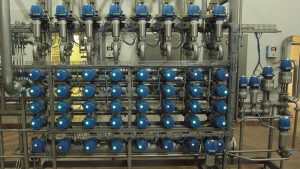 GEA South Africa was responsible for the expansion of the cold process capacity. The work included the following main steps:

The filtration package included the design and also the supply of all the equipment. The aim was to integrate the new filtration line including the GEA separator provided by the Namibian brewery into the process stream of the brewery. Major equipment required for the integration were three buffer tanks and a new separator valve block.

The concentrated chemical store package included the supply of equipment for the chemical store itself as well as the required pipework to connect the supply system to the various CIP plants within the brewery.

Modification without interrupting production
The modernization measures were completed end of 2012. While the work was carried out the brewery remained in full operation: a requirement of GEA South Africa to minimize shutdown times. In some instances the installation of new systems occurred in parallel to existing units until the new system became fully available, which allowed minimal change-over time.

Modifications of existing equipment are always especially challenging, but thanks to the close cooperation between the experienced site supervisor Eckardt Steib and the brewery, the work could be carried out smoothly and with only minimal interruption in production.