Everything but ordinary: Anders! Brouwerij brews with GEA technology

Anders! lets craft beer lovers try out their ideas without having their own brewery: Anders! Brouwerij from Halen, Belgium brews craft beer to customers’ recipes in any conceivable combination. The new GEA equipment increases the contract brewery’s capacity and efficiency. A Belgian triple with Sichuan pepper or cucumbers? For the brewers at Belgium’s Anders! Brouwerij no recipe is too weird for a test run at their Halen production facilities. In order to transform such ideas into tasty beer, you need a skilled brewmaster, a bold brewery and technical equipment able to meet the highest quality standards when performing such experiments. The Anders! contract brewery has been using GEA technology since 2016 and is ready to talk about their experience.

The Anders! interpretation of contract brewing

The brewery was founded in 2012 and insists on the exclamation mark in its name: “Anders!” They consider themselves libertarians and want to produce unusual beers without placing limits on their customers’ creativity. “Beer enthusiasts come to us, who want something more than run-of-the-mill products, but do not have the technology and expertise they need to make good beer,” says brewmaster Pieter de Bock. “Our business model has been such a hit, we have gone from the initial plans of producing 3,000 hectoliters of beer a year to 20,000 within a period of just three years.”

The customers often come from Belgium, the Netherlands, Germany, France and Scandinavia and form a tight-knit community, which is typical of the craft beer movement. Anders! now produces more than 200 different beers a year, which are consumed as far away as China, Brazil and North America. In order to handle the growing demand, Anders! decided to expand their facilities – and to work with the world’s brewing technology leader GEA, including their CRAFT-STAR™, a complete skid-mounted brewhouse. The brewery can produce five brews and 200 hectoliters of beer a day or 40,000 to 50,000 hectoliters over a year with 24-hour-operations, explained Pieter de Bock who played a key role in the Anders! 2.0 expansion program.

All from a single source

Why did the brewers choose GEA? “We wanted to make our most important investment with a single partner, so that we would not have to integrate a bunch of different systems,” says Pieter de Bock . “GEA is known for technology leadership. As we like to say in Belgium: It’s ‘German Gründlichkeit (thoroughness)’ – and that was important to us. And also our personal contact here in Belgium was a guy, who knows a lot about brewing and we were on the same page.” Thus the Belgian artisanal craft brewers worked with GEA on the technology for the entire hot and cold area. The brewhouse technology includes the GEA MILLSTAR™ wet grist mill, the GEA CRAFT-STAR™ brewhouse and GEA WORTSTAR™ skid-mounted wort aerator with wort cooler, which all provide for efficient production. Anders! uses the fully automated, 2.5-ton MILLSTAR™ for simultaneous crushing and mashing. The grist mill ensures continuous high quality and improved filtration in the lauter tun – one of the most important criteria when selecting suppliers, as the brewery needs to supply their customers with reliable and consistently good results. 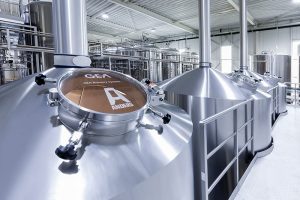 Since early 2016, Anders! has been brewing with the 3-vessel version of the GEA CRAFT-STAR™

“CRAFT-STAR™ is simply ideal for medium-sized specialty breweries such as Anders! with batch sizes of 40 hectoliters hot wort. The customer decided on a 3-vessel configuration with a mash tun kettle, a lauter tun and a combined whirlpool/wort kettle. The configuration can perform five brews within 24 hours,” says GEA Product Manager Oliver Jakob. The CRAFT-STAR™ is pre-assembled and tested in Kitzingen as a compact plug & play system with process piping, instrumentation and an automatic control system. Thus commissioning on site takes just a few days. Anders! was impressed by the quick installation: Just four to five weeks after assembly, the Belgians were able to test the first brew.

Up to 98 percent extract yield in the lauter tun

Extract efficiency is another benefit of the brewhouse. The brewhouse yield is a result of grist mill and lauter tun efficiency. The fixed components of the mash – the spent malt grains – are separated there from the fluids, i.e. the wort. “We are able to achieve 95 to 97 percent for a typical Anders! beer,” says Pieter de Bock with extreme satisfaction. “The stronger beers have a slightly lower yield, which is still superior to other lauter tuns.” 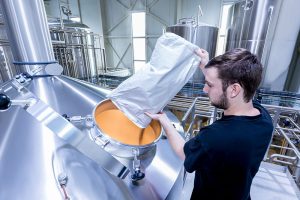 The hop yields were a challenge for the project participants: The hop yield is extremely important for the American-inspired hop-intensive IPA beers, which form a large part of the Anders! order book. How can the hop aromas be best extracted? “The CRAFT-STAR™ combines a whirlpool for trub separation and a wort kettle in a single unit. The principle behind the device is simple, but the efficient boiling system and design mean very little wort is lost,” says Oliver Jakob. A trub dam helps process the wort down to the last drop and remove the turbidity. “Together with GEA, we have managed to get the most out of the system in terms of efficiency,” adds the Anders! brewmaster. In total the new system is ten percent more efficient than the previous system.

The decisive factor for Anders! was having technology that would allow the implementation of the wide variety of recipes the customers demanded. Anybody who wants to brew a crisp summer wheat beer one day and a strong double or triple the next, needs reliable technology. The process control system allows to perfectly replicate the various recipes – at any time and whenever the customer wants to have their recipe brewed.

Clarification, dosing, pasteurization and carbonation in the cold process area 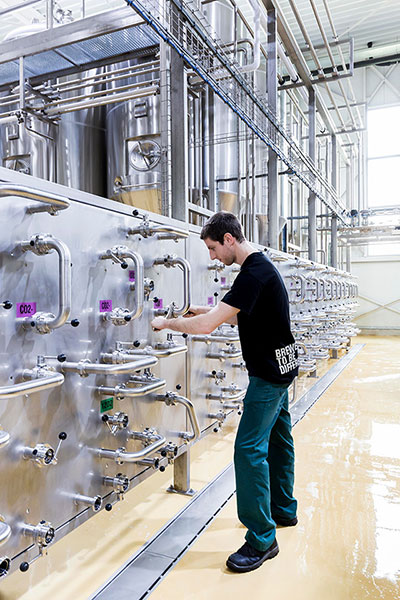 Since every single step in the brewing process can have a huge impact on taste, color, foam stability, and aging of the beer, Anders! also completely relies on GEA solutions in the cold process area: A central swing bend panel feeds the wort to the cylindroconical fermenters or “CCTs”, as the experts call them, which are available with capacities of 40, 80 and 120 hectoliters, thus accommodating from one to three brews. After fermentation and maturation, a GEA centrifuge ensures the required turbidity of the beer. Finally, a fixed piping system is used to transfer the finished beer to the bright beer tanks, where it is stored until bottling. If required, the brewers can include additional process skids between fermentation and maturation tanks, such as an inline dosing unit for liquid sugar and yeast, if Anders! wants to ensure secondary fermentation in the bottle for beers brewed according to Belgian recipes. At the customer’s request and depending on the sensitivity of the product, there is also a flash pasteurizer available for product pasteurization GEA Eco Flash Pasteurizer. In the last step, a carbonation system is used to individually adjust the carbon dioxide content.

The CRAFT-STAR™ is a new skid-mounted brew system for artisan craft breweries. Designed for a batch size of 40 hl (35 U.S. bbl) hot wort, the CRAFT-STAR™ is pre-assembled and tested in Kitzingen as a compact plug & play system with process piping, instrumentation and an automatic control system.