Installation of a new yeast propagation system Darguner Brauerei is part of the Danish Brewery Group Harboes Bryggeri A/S and located in Dargun, Mecklenburg-Western Pomerania. In early 2011, the brewery decided to install a new yeast propagation system from GEA Brewery Systems. This new system provides pure culture yeast for bottom fermented beers and is an essential part of the brewing process in Dargun.

Focus on innovation and value creation

The technical upgrade of the brewery began in 1991 with the installation of a canning line. In 1992, the brewhouse, the fermentation and storage cellar with yeast propagation unit as well as filtration and water treatment plant for an annual capacity of about 350,000 hl sales beer followed. In parallel, the glass bottling line and an in-house laboratory were put into operation. The first expansion phase was completed with the construction of a warehouse. In the years 1996/1997, the brewing capacity was increased to approximately 700,000 hl.

In 2003, Darguner Brauerei started to fill beer in PET bottles as one of the first breweries in Germany. At the same time, they worked on increasing the brewhouse capacity and expanded the storage capacity. With this project, the capacity in the brewhouse could be more than doubled in 2005.

Today, the production capacity in Dargun is about 1.8 million hectoliters per year. Thus, the brewery is one of the larger brewing facilities in Germany. Due to continuous new investment and modernization Darguner Brauerei today is a modern and technically well-equipped brewery.

Modern technology allows precise control of production processes and hence the production of top-quality beers – brewed according to the purity law of 1516. Only the best raw materials are used. In this way, consistently high product quality is ensured.

For a brewhouse capacity of 70 brews per week with a cast-out quantity of 400 hl, Darguner Brauerei needed an optimum supply of fresh propagation yeast to meet the quality requirements like fast start of fermentation and optimization of fermentation times and of course to maintain the high beer quality. The new fully automated propagation system should provide a concentration of 120 million yeast cells per milliliter of pitching yeast.

Sophisticated process engineering from GEA
GEA designed the system as a two-tank system. According to the number of brews per week and the quantity of cast-out wort the gross volume for the propagator and the assimilation tank was 16 hl and 340 hl. The brewery provided a new separate room for the equipment, where the propagation system including its own single-use CIP plant could be set up. The connection of the propagation room with the existing wort line was realized via a bypass.

Both tanks are designed as pressure vessels and equipped with appropriate fittings. Thus, hot cleaning as well as sterilization of both tanks is possible. In the piping system of the propagation equipment, VARIVENT® double seat valves with the T.VIS® feedback system of GEA were used. Pressure regulation and tank cleaning are done by the VARITOP® system. Automatic gas fittings control the CIP and gas supply, which is equipped with a CIP pre-run sterile air and exhaust air line. The gas fittings are integrated into the automatic cleaning process. 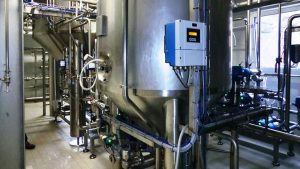 The control of the new yeast propagation equipment was integrated into the existing control system of the fermentation cellar. Software integration and commissioning were carried out by the brewery with technological support from the brewmasters of GEA. Thanks to the perfect preparation and the excellent cooperation with the team of Darguner Brauerei, commissioning took only 5 days.

The propagator is first filled with 7 – 8 hl cold wort. During the sterilization step, the wort in the vessel is heated up to a temperature of >105 °C for about 30 minutes and then cooled down again to 15 – 20 °C. Sterilization and cooling of the tank content is realized with heating and cooling surfaces in the tank shell. After aeration, the propagator is inoculated with laboratory yeast from the Carlsberg flask and aerated continuously until the optimum yeast cell count is reached.

Aeration takes place via an aeration pipe (sterile air is led into the tank from below). The transfer system supplied by GEA is characterized by low shear forces and ensures a fine distribution of air bubbles, which leads to optimum oxygen uptake by the yeast cells.

The yeast concentration is determined in the laboratory by means of the Thoma counting chamber. With precise adjustment of the process parameters reproducible results can be obtained.

When the requested yeast cell concentration in the high heads stage is reached, the content of the propagator is transferred by the circulation pump into the assimilation tank, which is already filled with 52 hl sterile cold wort. Then the propagator is emptied completely and cleaned. After that, it is immediately available again for the next propagation. When the requested optimum yeast cell count (120 – 160 million yeast cells per ml) is reached in the assimilator, another 165 hectoliters of cold wort are added to reach the pitching volume. After the propagation yeast was used for pitching, the assimilator is either cleaned and sterilized, or a residue of 35 hl yeast suspension is left in the tank, which is then used for another assimilation. The pitching yeast resulting from this second assimilation step is better adapted to the process conditions.

The yeast in the assimilator can be circulated through a circulation pipe up to eight times per day. The inlet is located in the shell – taking into account the optimum mixing angle and the filling levels. This leads to a rotation of the tank content as well as to a better heat transfer at the tank wall and improved homogeneity of the tank content.

This arrangement takes into account the remaining volume of 35 hl in the tank after emptying. This quantity is used for the next propagation cycle, this means for the production of the next batch. In this way, the yeast cells are already adapted to the process conditions in the propagation tank, which ensures time savings.

Like in the propagator, aeration in the assimilator is also realized with a vertical aeration pipe in the cone. The aeration rates are adjusted to the process and can be varied over a wide range. With interval aeration, the air supply is optimized and foam formation is reduced. In combination with the special homogenization process, the fine air bubbles can be kept in the suspension for a longer time and therefore improved mass transfer can be achieved. This method increases the metabolic activity of the yeast cells, improves the yeast vitality and finally allows a reduction of head space in the process tanks.

Conclusion
The innovative GEA yeast propagation system at Darguner Brauerei was set up and commissioned within 4 weeks. Due to optimized process control, the propagation process could be adapted to the overall process in the brewery and the objectives stipulated by the customer could be fully achieved. The new system is now an essential part of the brewing process in Dargun.

Darguner Brauerei is the German subsidiary of the Danish Brewery Group Harboes Bryggeri A/S. It was founded in 1991 under the name Darguner Klosterbrauerei (monastery brewery) and thus continues a centuries-old brewing tradition. Already in 1172, Danish monks from the Cistercian monastery Esrom settled down here and brewed the first Darguner beer – a staple food of the Middle Ages. Meanwhile, high-quality beer is brewed at this location with modern production methods and exported to more than 90 countries all over the world. Darguner Brauerei produces and sells beer, soft drinks as well as malt and wine-based mixed drinks.